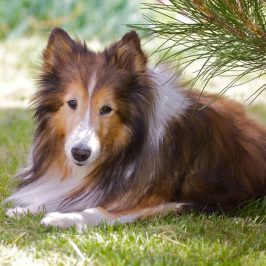 Dog sneezing happens for a variety of reasons, just like it does for their human counterparts. However, the sudden expulsion of air from the lungs through the nose and mouth is seldom the problem. We’ll help you to recognize common triggers of what may be causing your dog to sneeze and natural treatment to stop the sneezing.

Among the multitude of reasons for sneezing, only a few are actually problematic that can lead to bigger issues down the road. In humans, sneezing has been linked to anything from a sudden exposure to bright light (no, really) to allergies to even having a particularly full stomach. Humans can sneeze because of a sudden change in temperature or due to a viral infection, too.

For dogs, a sneeze is usually the result of an irritant entering the pharynx – the spot at the back of the throat that serves as the intersection between nasal and digestive passages – or the nose.

The body attempts to get rid of the irritant by expelling it, causing a great, big wet a-choo!

Most sneezes in dogs are pretty benign and may be the result of simple irritation, but some cases of sneezing are more complicated and may require a closer look.

In our four-legged friends, we’re looking at four main reasons they might sneeze:

Both can involve sneezing, mucus discharges and other symptoms. Older dogs may go through something known as neoplasia, the growth of an abnormal tissue that can also become rather inflamed.

In some dogs, sinus infections or colds may be quite minor. But in some older dogs, an infection of the sinus passages or the presence of neoplasia may lead to some complications. Neoplasia refers to the formation of a new or abnormal tissue, but it does not always imply anything cancerous.

It’s important to keep that in mind, as treating neoplasia-related sinus conditions requires accurate diagnosis and you’ll want your dog seen by a good holistic vet.

Some people use neoplasia and cancer interchangeably too, but this is a mistake. We will discuss cancer and tumors later in this article, but neoplasia presence in older dogs may make them more vulnerable to sinus infections.

Colds are also reasons to sneeze for dogs. If your dog is experiencing nasal discharge, lethargy, fever, or diminished appetite, a cold may be the answer. If these symptoms persist for a while, something more significant may be present. And that will require a visit to your holistic vet to rule out anything serious.

People who encounter things like cat hair or hay or other vile forms of the spring invasion are well acquainted with the brutality of allergy season. Dogs are no different, as they can develop allergic reactions to all sorts of stimuli. And those allergic reactions will include, of course, the delirious sneeze or possibly even the dreadful sneezing fit.

Dogs can suffer seasonal allergies to things like pollen and flowers. If you spot your pooch having a run of gloppy sneezes, take a look around and see if there’s anything in his or her direct vicinity that might be causing a reaction.

If your dog is only sneezing when rolling around in freshly-cut grass, for instance, you probably know the score.

Dogs’ noses can be irritated by all sorts of things, like cigarette smoke or perfume or the exhaust from a passing car. Anything can do the trick, so be wary of your environment and what’s triggering the sneeze. If it’s a one-off situation, you can probably rest easy it’s a foreign object causing the to-do.

Finally, nobody likes to talk about tumors and for good reason. Cancer and tumors are scary business, but in extremely rare cases a sneeze may be a symptom of something more significant. If your pet has chronic sneezes and you can rule out allergies, sinus infections and even neoplasia as a result, there may be something else going on.

Tumors are most common in senior dogs over the age of eight, so keep that in mind. And try not to panic or go overboard before seeing a medical professional. In the case of a tumor, sneezing may be sporadic at first and build into something more noteworthy. There will likely be bloody discharge from one side of the nose, plus other symptoms of cancer.

Reverse Sneezing in Dogs & How to Naturally Stop it

In most cases, sneezing is nothing to worry about.

There are cases of “reverse sneezing,” caused by a spasm that narrows the airway momentarily. This is caused by things like pulling on the leash or allergies. The dog will often start snorting or honking.

Note: The tip to the right can help right away. However, if used too much, it can dry your dog’s nasal passages. Too much means several times daily.

So, if your dog has environmental allergies, provide him or her with a natural remedy such this natural allergy tonic for dogs or this homeopathic medicine to help manage respiratory allergy symptoms.

Dogs, like children and adults and anyone else in the animal kingdom, go through their foibles and issues. Sneezing is just one of the many things that can occur in the wonderful world of dogs and is generally not an issue unless it presents with other difficulties or becomes too persistent to set aside.