If you’re a dog owner, then you’ve probably watched your dog eat grass before and it very well may have been couch grass. Here in this article we share a few reasons your dog may be munching on the back yard grass.

What is Couch Grass good for?

It should be noted that dogs that consume couch grass may vomit it right back up again. This is no cause for concern, as this is part of the digestive process. It is believed that dogs instinctively know to eat couch grass to induce vomiting and subsequently cool the blood. This interesting tidbit once again reveals that our pets do know best when it comes to their health and wellbeing. 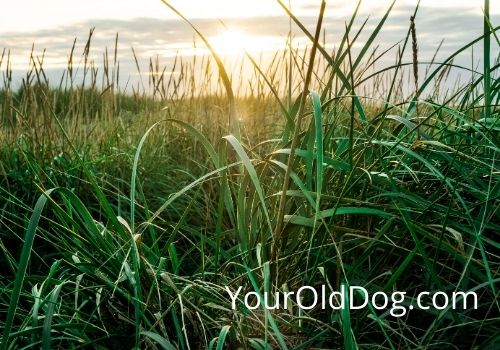 Couch grass is seen as an irritant for many gardeners and people just trying to maintain a good yard.

This is considered an invasive weed and it can be hard to maintain couch grass because the rhizomes are prone to going wherever they want. That can make this herbal treatment a nuisance to cultivate but nevertheless a joy to use.

When it comes to couch grass for dogs, there are no known side effects beyond the vomiting that may take place when dogs consume it raw from the ground.

This vomiting is, once again, part of a normal digestive cleansing process and should not be any cause for alarm. As with any herbal treatment, there may be allergic reactions to consider.

For the most part, however, this is a safe grass.

Reasons to Use Couch Grass for Dogs

The availability of couch grass for dogs is one of the best reasons to use it on a regular basis. It may wreak havoc on gardeners, but herbalists find it to be one of those miracle products that can be consumed by almost any pet with great results.

While the nutritional value of couch grass isn’t exactly known, it does have anti-inflammatory properties and makes for one heck of a diuretic.

All About Couch Grass

Today we’re going to talk about couch grass for dogs. Also known as Elymus repens, couch grass is a perennial species of grass native to Europe, Asia and parts of Africa. It has been found in other climates as well but is mostly considered a weed in milder northern locales.

Couch grass is noted for its creeping rootstalks, which make it a rather invasive species because it will grow quickly across grasslands. This grass is also noted for its usage as forage, with all sorts of grazing animals using it for food. Grassland birds, like finches, eat couch grass seeds and caterpillars also use it for food.

Despite being the bane of existence for gardeners, couch grass is very interesting for herbalists. It has several medicinal properties and can be used by humans as well as pets. The rhizomes have anti-inflammatory and astringent properties, plus they can be used as a diuretic.

Cats and dogs alike tend to eat the leaves, which is a great help if your four-legged friend has an upset stomach or any kind of digestive concern. Couch grass is also a very hearty turf type grass for active dogs that like to run and play in their yard.