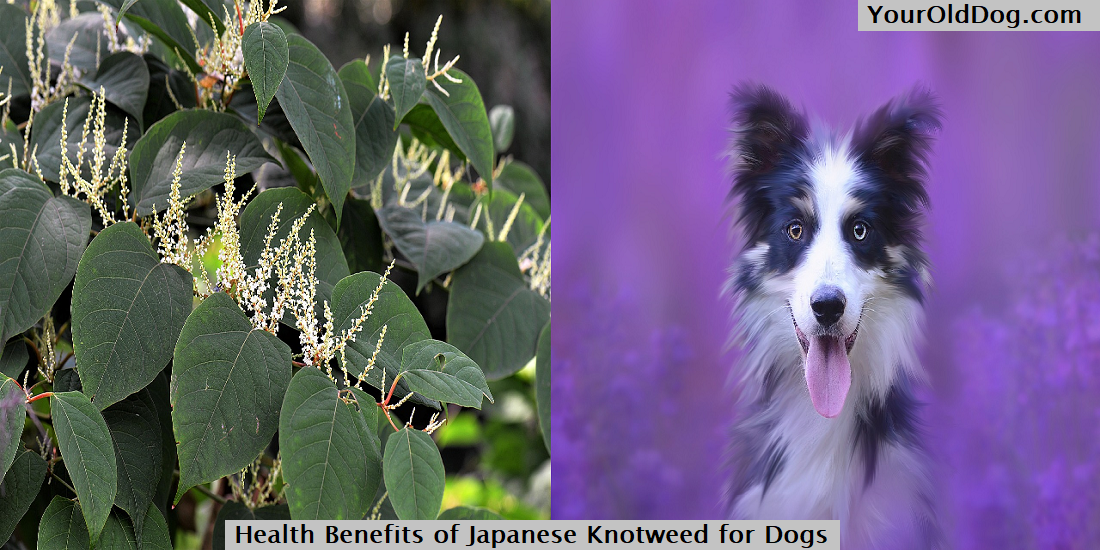 If you live in the Northeastern United States, you probably know all about Japanese Knotweed – even if you aren’t sure what it’s called. The weed is an invasive pain in the neck and can be found all over the place, but it’s particularly aggressive in certain areas and can be difficult to get rid of.

But here’s the thing: it’s edible for humans, has medicinal qualities and is an excellent source of vitamin A. What’s more, the roots contain large amounts of the natural polyphenol known as resveratrol and that’s where the magic is for dogs.

Resveratrol is also commonly found in red wine which is one of the reasons why red wine is so good for you.  However, since we want to avoid giving our dogs red wine or resveratrol from grapes of course, Japanese Knotweed Supplement is the best source for your dog.

How Can Japanese Knotweed Supplement Help Your Dog?

Supplements tend to be reliable enough when it comes to Japanese knotweed and resveratrol, but it’s important to remember that clinical trials are limited. While there has been some exciting information regarding the supplement and cancer in dogs, most of the studies involve mice.

Along with the benefits of Japanese knotweed, with respect to Lyme disease and the potential benefits of the supplement in terms of fighting cancer, there’s some strong anecdotal evidence regarding its antiviral and antibacterial properties. Some have reported increased energy levels and alertness in dogs who’ve consumed Japanese knotweed roots, but the lack of clinical evidence should also be considered.

Is Japanese Knotweed Poisonous to Dogs?

Despite this limited evidence, there is some anecdotal evidence to suggest that a small dosage of resveratrol in the range of five to seven milligrams per 30 pounds of body weight daily should do the trick. Exceeding this dosage is not wise until further research is done, but the small dosage should help you safely assess the viability of this herbal treatment for your four-legged family member.

We recommend a trusted tincture like shown above from Montana Farmacy.  Keep in mind that this formula contains alcohol and some dogs don’t tolerate alcohol well.  You can work around this problem by diluting the recommended dose with equal amounts of hot, filtered water or working up to the recommended dosage.

It can be difficult to convert from milligrams to milliliters, etc.  It’s often recommended to simply convert the human dosage into a canine dosage by doing the following.  Example: If your dog is 30 pounds, divide 30 by 150.  This breaks down to 0.2 or 20%.  So, you’d give your dog 20% of the human dosage.

PLEASE READ:   The problem with tinctures and extracts is the alcohol they contain. Some pets just don’t tolerate it, but the alcohol helps to make the herbal tincture effective. A way around the tolerance issue is to dilute the dose of herbal tincture with an equal amount of hot water. This helps to turn the alcohol into vapor by evaporating it.

If for some strange reason your dog is on blood thinners of any kind, avoid using Japanese Knotweed.

Can cause stomach upset.

There are no known studies regarding Japanese knotweed and dogs that suggest any known toxic side effects in dogs, but again it must be stressed that research is limited. There have been some studies in rats, where higher doses of the supplement led to significant problems like dehydration, anemia and even kidney problems.

It should be noted that research on resveratrol is rather limited when it comes to dogs and most of the available evidence is anecdotal at best.

As always, caution should be used.

Can I give my dog resveratrol? Reasons to Use

Japanese knotweed has a number of potential applications for your dog, even if research is tenuous, and that makes it an exciting addition to your herbal toolkit if you exercise care.

It carries benefits for treating Lyme disease, for instance, and has been reported to have an effect in dogs with cancer. It also packs an anti-aging punch in human beings thanks to an ability to stimulate the SIRT1 gene, so there may be some reason to hope that it carries the same application in dogs.

Most herbal retailers have supplements with Japanese knotweed and resveratrol available in some capacity and can inform you as to the side effects and potential usages for your family member. Some have even suggested using the whole root, although application data is limited.