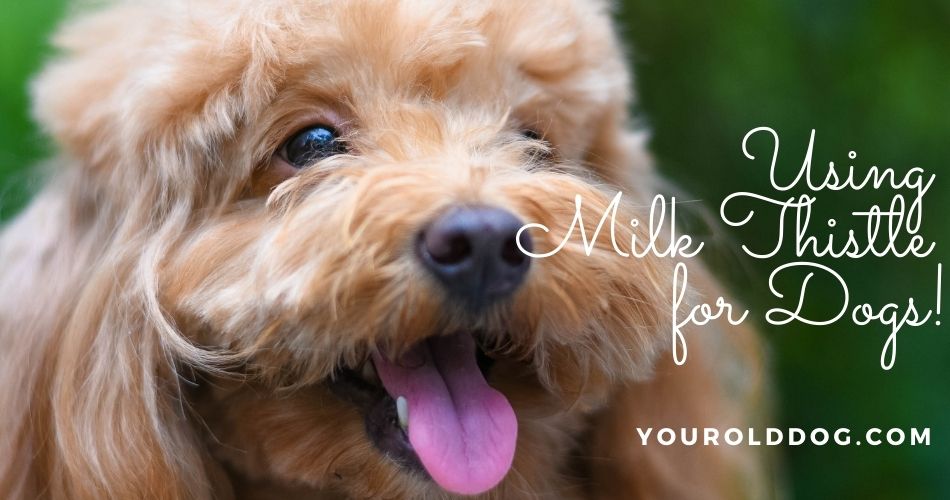 Milk Thistle for Dogs and How to Safely Use It

One of the most beneficial of all the herbs for your senior dog is milk thistle. Called Silybum marianum or blessed milk thistle for dogs or Mary thistle or Scotch thistle or any variety of things, this annual or biennial plant is found throughout the world and has been researched for several medicinal applications.

It is also used in traditional Chinese medicine to clear toxins and to soothe the liver, plus it’s a favorite in dubious internet circles for its apparent ability to “slow cancer.”

The safety of milk thistle is worth mentioning because it underlines how good an option this herb can be for your older dog. Apart from cost and time, there’s no associated risk with using milk thistle. You can initiate a “try it out” approach to this treatment option, but other possibilities such as marshmallow root should also be considered if milk thistle isn’t effective.

In terms of milk thistle for dogs, we do know that the flavonoid silymarin is the important piece of the puzzle because Silymarin releases toxins that can gather in the liver and assist in cell regeneration, which suggests that it can also help boost your pet’s immune system.

Using it on a healthy dog is not recommended, as there are no discernible supplementary benefits to speak of though.

Most milk thistle supplements contain anywhere from 50-500 milligrams. 175mg seems to be the norm for

Advanced Liver Disease: Use up to 200mg per 10 lbs of body weight of milk thistle extract a day. If using for other health issues where your dog isn’t suffering from a serious illness; a good rule of thumb is to stick with 1/3 to 1/2 of this dose instead.

As mentioned, blessed milk thistle is a very safe treatment option for your dog. There are no known side effects other than mild stomach upset and diarrhea, indigestion, intestinal gas, bloating, fullness or pain and loss of appetite.

Drug interactions: According to Dr.Weil.com, the liver enzymes that break down milk thistle may interfere with the process of drugs that are metabolized by those exact enzymes. Can lead to hypoglycemia when combined with medications for diabetics such as Amaryl. This also includes the allergy medicine fexodenadine (Allegra); cholesterol lowering drugs; anti-anxiety drugs including Xanax, Valium and Ativan; blood thinning medications including Coumadin and some cancer maedications such as Tamoxifen.