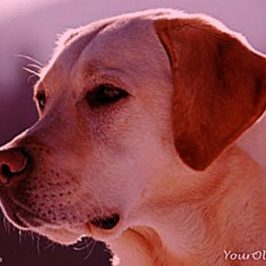 Max’s story is dedicated to a yellow lab named Max and his wonderful, caring owners, the Mikus family.

I thank the Mikus family for sharing their powerful story of all the struggles that they endured over the years in dealing with their dog’s fear of thunder.

Max’s story begins with a beautiful eight year old yellow lab who lived most days of his life as a happy, friendly and playful dog. He was a typical Labrador Retriever and enjoyed life to the fullest.

He loved his family including his 12 year old buddy “Rookie”. They would run through the yard together sniffing and making their marks.

It was only when the skies would start to rumble that Maxie’s life, and his family’s life would turn into complete disarray. You see Max suffered with a severe anxiety caused by thunder. This is a condition where these dogs feel extreme nervousness due to the noise of thunder and/or a change in barometric pressure.

This article may be of help if your own dog is exhibiting this fear.  Also, please be sure to check out my review of the thundershirt for dogs here.

Max was one of the worst cases of that vets in the area had ever seen. If you’ve saw the movie or read the popular book Marley And Me, then you have a good idea of exactly what this condition is.  However, Max’s story even surpassed Marley with his anxiety and fear of storms.

For eight years Max tunneled his way through concrete walls, doors, and scratched and bloodied himself. 12 doors were replaced and all the doors had to be kept open at all times in the event of a storm and the family would not be at home.

Like most dog owners who have a dog suffering from this condition, the Mikus family tried it all. Crates, medication, giving him love during the storm, t-shirts, placing him in the bath-tub and so on. Vets told the family that Max would progressively get worse as time went on.

On May 13, 2011 Max’s story gets even worse. Julie raced home in the midst of a storm along with her six year old son. By the time she arrived home she found Max covered from head to toe in oil and gasoline. Max had broken into the garage and literally chewed through gasoline and oil tanks. The entire garage floor was flooded with the contaminants which Julie unknowingly drove over with her car. One spark could have ignited the entire house. The home was also filled with carbon monoxide.

Julie immediately dialed 911 and the operator told Julie to leave the house immediately for fear of an explosion. She got her son out of the house and tried desperately to get Max to follow her out as well. This fateful storm had pushed her sweet gentle giant over the edge. Max had ingested so much gasoline and oil that he literally lost his mind.

Max was fighting Julie with every step and wouldn’t allow her to lead him to the door. Finally, Julie managed to coax Max outside still leaving his leash in tact. Making sure her son and both dogs were safely outside, she locked the gates and ran to the neighbors for help. Max lost it when he spotted the lightening in the sky and the fire trucks barreling down the street.

Max had chewed through the leash and was pummeling himself against the gate. He had managed to break through the locked gate. Thankfully Julie’s brother and father sped up the street to help Julie get a hold of Max once again. His eyes were wild and he was shaking. This wasn’t the Max that Julie and her family knew.

The situation was awful. There was so much excitement happening around them with firemen placing industry fans throughout the home to clear the carbon monoxide and covering the gas and oil spills.

By far, it was the worst thing that could have happened for Max and his family. The vet said when it got to this point they would have to make the very difficult decision to put Max to sleep. The specialists that Julie and her husband consulted years before said that eventually Max would kill himself or do serious harm to a member of the family.

They placed Julie’s son in the ambulance and checked him over for carbon monoxide poisoning. Luckily everyone was okay.

Julie indicated that when she thinks of the disaster that could have happened, she shudders in terror.

“We feel so sorry for our Maximus. He was a faithful friend and aside from his thunder anxiety, he was the perfect friend, always watching over our son and his buddy. He did whatever Ben wanted- played in forts and played pirates.

Telling your child their pet is gone is the hardest thing. Ben keeps saying what are we going to do without Max? I tell him that we are going to remember him forever. We know in our hearts that we did the very best for him.

Our vet always said that anyone else would have given up on this dog a long time ago. I never gave up on Max! Unfortunately, there came a time when that dreaded decision – the one they talked with us about – it had to be made to protect both our beloved Max and our family as well. It was time to give our Maxie the peace that he truly deserved.”

Max’s story would end on May 13, 2011. The family decided to put Max to sleep that fateful day. “Our hearts ache and we can’t stop the tears from falling. We will miss him forever.” ~Julie Mikus

This is a story that I can understand, first hand.  A story that I could relate to on a personal level. My own dog (who happened to also be a yellow lab) “Lulu”, suffered with this same fear of thunder her entire life of 16 years. We rescued Lulu at the age of two and she immediately showed signs of anxiety with the first storm. We had replaced baseboards and paneling throughout our home many times. We very rarely would leave Lulu alone at all during storm season – just to be on the safe side. Yet, there were times in life when we had too. You can read Lulu’s story here.

Max’s story is just one of many sad cases of dogs suffering with severe anxiety.  Cases of families struggling to understand this condition and to simply cope. These dogs most often find themselves back in shelters because people don’t want to deal with them.

The Mikus family wasn’t like that. They took Max and they showered him with love for 8 years. They put aside the damage and destruction that Max caused due to his fear of thunder, because they understood that he couldn’t help it. They deserve to be commended for their years of understanding and patience and I want to personally thank them. Max would want this for his family.

R.I.P. boy, your family loves you.