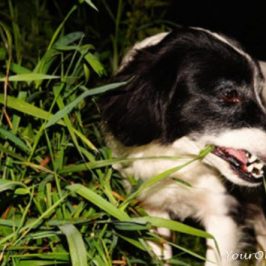 The mere thought of forcing a dog to eat a vegetarian diet is extremely disturbing to passionate dog lovers like myself.  Imposing one’s ideology on the family dog is just plain cruel.

Although, I’ve been an animal lover my entire life, I am not a vegetarian and I do not pass judgment on those who make a moral and compassionate decision to eliminate meat from their own diet.

In fact, I have a tremendous amount of respect for those that do.

However, I am strongly against using this same thought process on the family dog.  They are prey animals and meatless meals are not recommended.

Characteristics and Confirmation that DOGS ARE Carnivores

While I’m not going into great detail about omnivores and herbivores in this article; here’s specific and important details that confirm your dog is indeed a carnivore and why you should refrain from feeding a vegetarian diet. The structure and design of his entire digestive system is a clear indication of his desire and need for animal based protein:

1. What is a carnivore? An animal that requires meat for it’s nutritional needs and energy requirements; also known as a meat eater. Their teeth are often compared to scissors. They are very strong and consist of fangs and pointed molars (aka carnassials). This is because the teeth and jaws of carnivores (such as wolves, lions, etc.) are designed to easily rip through tissue, skin and bone of prey.

Have you ever wondered why your dog doesn’t chew his food?  He may gulp and swallow his food whole. This is true characteristic of a carnivore. Meat eaters do not chew food like an omnivore does.

Their jaws only move in an up and down crunching motion, versus side to side and their digestive system is shorter than omnivores and herbivores.  Dogs are engineered for quick, easy absorption of animal matter.  Because of the amount of acid in the stomach of a carnivore, animal protein is broken down and digested quickly.

Like all carnivores, dogs are missing Amaylase in their saliva and this is yet another critical reason why vegan diets for dogs are a very bad idea.  Amaylase is the enzyme found in the saliva of both omnivores and herbivores that help with the digestion of carbohydrates and other starches.

By feeding your dog as if she were an omnivore or an herbivore, you place a great deal of added stress on the pancreas, and this is a dangerous thing.

What is a omnivore?An animal that consumes both meat and plants for it’s nutritional requirements.  The teeth of omnivores closely resemble those of a carnivore.

3. What is a herbivore? An animal that mainly eats foliage and vegetation as the main ingredient of it’s diet. Herbivores are missing the canines (fangs) and mostly large, square and and flat.  Their teeth designed for chewing plants and vegetation.

So, What’s All The Confusion Surrounding The Classification of The Domestic Dog?

Did you know that the Smithsonian Institution classifies dogs as carnivores?  The internal architecture of the domestic dog doesn’t lie.  It’s undeniable!

However, there are those that will regularly debate that dogs are omnivores and can eat a variety of foods.  My response is this:

“Dogs are and will always be carnivores FIRST!  They are at our mercy to feed them and eat whatever it is we desire to put in front of them. They do not have a choice.  But given the choice, they are without a doubt a true carnivore and crave meat.  It’s not unhealthy to include other healthy foods in your dog’s diet, but the majority of his meal, should always be meat.”  ~ Janie Knetzer

The 2 Biggest Reasons You Are Being Lied To…

They produce junk food consisting of mostly carbohydrates and grains such as whole ground corn, whole grain meal, soybean meal, brewers rice, meat and bone meal and whatever other garbage they can throw in there.  I believe this is another reason why those that argue the point, like to throw around the term that “dogs are scavengers.”

How Do I Feed My Dogs?

My dogs eat a variety of foods including raw, dehydrated formulas, and 95% canned meats.  Rotation is good and variety is always recommended with meat being the majority of what your dog eats.

What I hope that you take away from this article is that the number one source of protein for your dog must always be a good source of meat.  If your dog is young, please look into raw feeding.  I purchase a prepared raw formula made by Primal.  He should eat more meat than anything else.

If you are considering a vegan diet for your dog, I urge you to please reconsider.