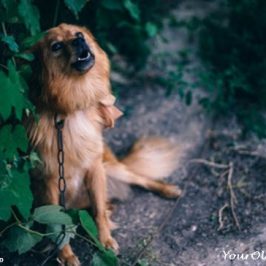 Recently someone brought to my attention a condition called Idiopathic Vestibular Disease after their older dog was diagnosed with it. The condition can render symptoms similar to that of a stroke in dogs. It is common in old dogs and can scare the pants off of any dog owner. I decided to check into the condition a little further.

Idiopathic Vestibular Disease affects older dogs and it’s symptoms can appear quickly. One day your old dog is fine, the next day he has a head tilt or he’s experiencing horizontal eye movement.

This condition can scare the pants off of any owner of an older dog. While it’s symptoms can mimic that of a stroke in dogs, Idiopathic Vestibular Disease is not a stroke.

The term “vestibular” means relating to a vestibule, particularly the inner ear, or more to the sense of balance. This is what allows us to control and maintain our balance. Both the left and right sides are responsible for gathering information and transmitting it to the brain.

When one side of the brain suddenly malfunctions, it creates chaos in which the brain thinks that it’s world is lopsided and/or spinning. This is what causes the symptoms in the dog (or cat).

A brain lesion located in the central brain is a very serious condition and many times pets have a difficult time recovering. A CT Scan or MRI will be necessary to pinpoint exactly how serious it is and how it’s affecting the brain, and whether or not treatment is an option.

If the vestibular disease is cause by an ear infection, the prognosis is very good. The only way to diagnose and tell whether or not it’s a brain lesion or an inner ear infection is to take your dog to the vet.

Blood work is recommended to rule out any other underlying problems. Upon confirmation of Idiopathic Vestibular Disease, dogs typically regain most balance within 72 hours and are back to normal within weeks.

However, in the early stages of recovery, your dog will need your help in getting around. He has to actually learn how to get around again including how to get out to the potty as well as getting to his food bowl.

Use precaution with stairs and slippery floors since your old guy could fall and hurt himself.  They have a lot of different boots now that can help give your dog stability on slippery floors and other surfaces.  It’s important that you coax your old dog to get around. I recommend retraining him on surfaces such as carpeting or grass to help him start to move around once again.