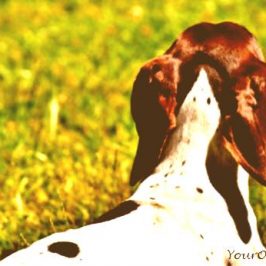 Last time, we covered the basics of hearing loss in older dogs and the importance of hearing for our four-legged friends.

With that understanding in place, it’s time to move on to explore some of the early signs and symptoms with respect to a lack of hearing and deafness in dogs.

If you missed our first article, you can read more on the basics regarding dogs and hearing loss.

Response Deficit – What Does It Mean?

Perhaps the most obvious symptom of hearing loss in older dogs is that of response deficit.

This is a fancy way of saying that your dog will ignore commands or calls because he or she doesn’t hear them. Example:

Another sign that your dog may be losing his or her hearing is if he or she startles easily. Here’s some common reasons and reactions related to why your dog may appear suddenly startled:

Other Signs and Symptoms of Hearing Loss in Older Dogs

There are a few other noted signs and symptoms of hearing loss in older dogs, some of which don’t seem to make much sense at the outset but may point to a larger problem with your best friend’s hearing. Keep an eye out for the following:

Dogs will typically show more signs of deafness and hearing loss than cats or other types of domesticated animals, likely because hearing is such an important part of their lives.

Keep an eye out for the aforementioned symptoms and for any strange behavior coming from your dog, as it could be an early sign that something is going wrong with his or her ears.

Life with hearing loss does not mean it’s the end of the road, after all, and your dog deserves the best possible care going forward with this difficult condition.