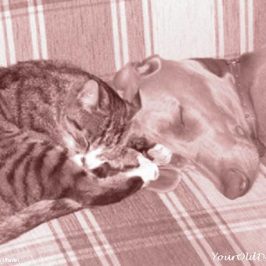 The Dogs vs Cats Battle

I recently read an article “The Dogs Vs Cats” battle in the Parade that I thought was alot of fun and worth sharing. I love articles like this and I think most pet lovers do to.

The dogs vs cats battle was to determine who comes out on top when it comes to intelligence and skills. So, here we go everybody – let the battle begin:

Which of the two have more stamina?

Alaskan Iditarod dogs run approximately 1,100 miles in two weeks time in 40 degree F weather. A fifty five pound husky can burn roughly 12,000 calories a day using fat as their main energy source. No other athletic species can compete.
The Dogs Vs Cats Battle: Dogs win this one hands down or should we say paws down 😮 !

Whose more agile, the dog or the cat?

Cats are definitely more limber and have exceptional balance. The article stated that it’s believed when cats fall from 10 stories or above, they often have time to position themselves to land flat on their chest and belly (this doesn’t mean that every cat lands on his chest and belly though – many die). Cats that fall from five to nine stories actually have more injuries. Interesting huh?

Dogs on the other hand are not very agile at all. Unlike cats, dogs don’t have what it takes to position their bodies in midair.
The Dogs Vs Cats Battle: Cats are definitely the winner here.

Which Are Better Hunters

Well the felines easily win this one. Although I do have to say that my “Lulu” was one of the best hunters I’ve ever had. She was incredibly patient. She would sit in a spot and watch the ground, cocking her head to one side. She would sit or lay their for hours and all of sudden put her head in the hole and pull a mole out of the ground. She was good. But when it comes to survival, cats go for the kill and they’re very good at it.
The Dogs vs Cats Battle: The cats win this one too.

Whose The Hardest Worker?

Actually dogs and cats were initially used for very practical reasons. Dogs were used to hunt and herd, while cats were used to kill vermin. Today, dogs do a variety of jobs: sniff out drugs, guide the blind, identify gas leaks, detect termites, alert owners to seizures, chase down bad guys and even today they are still good at herding. Cats on the other hand just don’t have what it takes to win this one.
The Dogs Vs Cats Battle: Dogs win this one folks!

Who Lives The Longest

According to the article and I’m not sure that I agree with this, but cats supposedly have a life span of 13-14 years and dogs live 11 years. Of course size and environment make a huge difference for dogs. Cats who live indoors live much longer than cats that live outside.
The Dogs Vs Cats Battle: The cats win here too.

Greyhounds can run at a speed of 40 mph and no cat can top that. In fact, no other breed of dog can top it either. We’re talking house pets, so Cheetah’s don’t count – just in case you’re wondering!
The Dogs Vs Cats Battle – Dogs win this one!

Whose More Independent – Dogs or Cats?

Domesticated dogs were meant to interact, live and hunt with humans. Dogs certainly thrive on human attention and they need us to feed, bathe, play and let them know how much we love them at all times. Cats on the other hand were domesticated to chase rodents and they needed no supervision in order to do it. That’s why house cats to this day still mimic their ancestral behavior such as hunting, cleaning and burying their waste.
The Dogs Vs Cats Battle: We all know cat’s win this one!

Who Has The Best Sense of Smell?

Cats have between 45 and 80 million olfactory receptors (allows to detect odor). A dogs nose holds between 149 and 300 million olfactory receptors. Cats can in no way compete with this. It used to be that dogs relied heavily on their sense of smell to avoid predators and find prey, which is still the case for wild dogs.
The Dogs Vs Cats Battle: Dogs win this one with ease.

Who Is The Smartest?

The avg dog can learn 165 words – not too shabby! Cat’s can learn roughly 35 words. According to the article, the smartest dogs are border collies, poodles, german shepherds and golden retrievers. Studies show that dogs observe and learn from human behavior. How cool is that! Dogs understand object performance (ball rolls under chair – dog knows it’s still there). Cats also understand object performance, but can’t predict exactly where the ball will reappear.

As far as communication, complex thinking and ease of training – dogs easily win. However, dogs are more social and this favors intelligence, whereas cats evolved as loners and does not favor intelligence.
The Dog Vs Cat Battle: This one goes to the dogs!