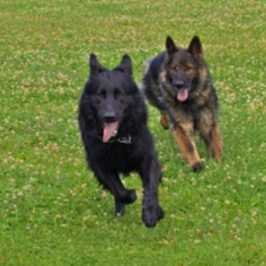 Doggy play dates are most often associated with puppies and young adult dogs simply because of their activity level. However, it’s equally important to include your older dog in on the fun.

Maybe he’s not as active as he once was, but that doesn’t mean he shouldn’t be mobile and social! By nature dogs are social beings and this is why it’s so important to include him in on activities.

If he doesn’t want to play, he won’t.  Doggy play dates are an excellent way to reinforce both physical and emotional well being for your senior dog.

All dogs require at least 30 minutes of exercise daily. The level of exercise is what changes with age. While younger dogs play vigorously amongst each other, older dogs will often just watch the other dogs and maybe walk around a little. This is o.k. Don’t expect your senior to run around like the younger dogs, but if she does, then that’s great.

Lack of interest in playtime is one of the hardest things to accept for those with older dogs. We want our dogs to remain young and full of life, romping through the grass and tumbling around with other dogs, but it’s unrealistic.

Unfortunately, every living thing ages and along with age comes change. Accept this change in your older dog and listen to him. He knows what he can and what he can’t do. Maybe he just likes to roll around in the yard on his back for a couple of minutes and that’s o.k. too. The walk to and from the play date are very good for him.

Although my old girl passed away, we still go on play dates every day up to Boo’s house where some of the neighborhood dogs gather. At the age of 16, Lulu enjoyed this more than anything. She enjoyed seeing the activity around her and she would still frolic and play too.

The mental stimulation is huge part of doggy play dates for older dogs. This allows them to be involved without actually being involved. They can watch from the sidelines and use their seniority to give a quick growl if somebody gets too close.

You want your old dog dog to be safe during his doggy play dates, but don’t get so over protective that your dog can’t relax. I tell people this all the time.

Play dates are one of the best ways to socialize dogs.

It allows them to sniff, bump shoulders and check each other out – get to know one another. In the case of socializing older dogs, they usually do a quick sniff around or two and that’s enough for them. This is how they bond and this is vital to mental stimulation.

It’s critical to watch the body language when introducing dogs of any age and use common sense.

It’s important to make sure that all the dogs included in the play date have good manners. Young dogs can get a little crazy at times, so if your old guy or gal is more on the fragile side, guard him from the rough-housing going on between the younger dogs.

Make it fun for him though and sneak him a treat while he’s watching the other dogs. The bottom line is to include your older dog in on as much activity as possible. Doggy play time gives them something to look forward to.