Dog Incontinence Help – What Worked for Our Dog 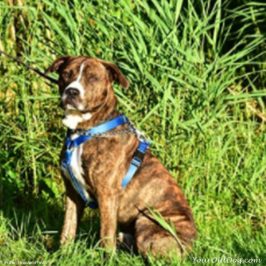 Our Dog’s Struggle with Incontinence

Ever since our doberman was 2-3 years old, incontinence had been a problem for her. Jenna came to us from the Doberman Rescue in our area and she was very hyper and had many skin problems from the start.

We had taken her to the vet on several occasions for what started as minor leaking and incontinence. Our original veterinarian was a traditional vet and offered the standard drug “Proin” for dog’s with incontinence issues.

While the Proin initially helped, she had other signs that started to progress as well. Her skin was flaky and her coat was coarse, thinning and she was balding in several spots. She also had thin wrinkled skin as well as a pot belly and this is where she got her nick name “jelly belly” 😮

It’s important to understand that I’m extremely cautious and particular about our dog’s diet and the quality of food that I feed them. In fact, I often coach others on diets for their dogs.  This is what made this situation even more baffling for me. When dogs lack or continue to eat a poor diet, there skin will show some of the same signs that Jenna was having; but my girl eats very premium foods and treats and supplements better than my own.

As time went on her incontinence grew worse even while taking Proin and grew to the point that she would soil her bed completely. We were letting her out at least once every two hours. So, back to the vet we went and the doctor suggested a thyroid test in which we agreed. The test for hypothyroidism came back normal (at least that’s what this vet indicated) and decided to up her Proin medication for incontinence.

Although I new that spay incontinence is common in female dobermans, I was frustrated because I felt that we were just masking her symptoms without really knowing the real cause. Since I couldn’t seem to get any other results and the vet didn’t seem to be alarmed, I decided that we would just have to deal with it.

She stayed on the Proin and we purchased some dog diapers for her and continued to let her out like we had been. Things grew worse for Jenna and she started losing weight; she was ravenous and didn’t want to play at all. For those of you that might not know, Doberman’s are at a high risk of Dilated Cardiomyopathy (a heart condition) as well as Cushings Disease and Hypothyroidism. Both Cushings Disease and Hypothyroidism may include incontinence symptoms. However, Hypothyroidism symptoms often mimic those of other diseases.

So now Jenna was on a higher dose of Proin for incontinence which was doing very little and she was still leaking continuously. I decided it was time to see a holistic veterinarian. The only reason that I hadn’t before this was the drive, but now I felt that it was absolutely necessary and I’m glad that I did.

Despite the fact that Jenna was already tested, the doctor ran a complete 6 panel thyroid test on Jenna and also did an Electrocardiogram (EKG) to check her heart.  Update 12/29/12:  Jenna was diagnosed with Cardio Dilated Myopathy (extremely common in dobes) and placed on supplemental heart medication.

The thyroid test came back showing that Jenna does indeed have Hypothyroidism. The point that I want to make to anyone reading this is that — traditional veterinarians typically do not run a complete 6 panel thyroid test and if they do, most are not knowledgeable of “Borderline” or “Low-Normal” Hypothyroidism. What this means is that the vet may tell you that the dog’s thyroid is normal, when in reality, it’s not.

The holistic vet placed Jenna on Soloxine which is a very common medication for Hypothyroidism. Unfortunately, Jenna showed no improvement at all. The vet then placed her on Thyrolar 1 and BINGO — Jenna’s incontinence improved and her skin and coat look 100% better. Her ravenous hunger also improved and she was like a new dog. I do have to say that Jenna is still currently on the prescription medicine Proin, but doing very well and no longer leaking while on the Proin. 😮

Is It The Thyroid – Get The Results Right The First Time

My recommendation for anyone who suspects that their dog has a thyroid issue — is to go directly through a holistic vet and avoid traditional veterinarians completely or go through Dr. Jean Dodd’s at Hemopet. She is considered the best regarding diagnosing dogs with Hypothyroidism. She is located in California, but receives samples from all over the world. Dr. Dodd’s will personally analyze your dog’s test and include her own comments. She will also talk with you over the phone for free, should you have questions regarding your dog’s thyroid panel and she’ll consult with your vet on recommended dosages too.

Don’t be intimidated about asking your vet to draw blood for a complete 6 panel thyroid test and send it to Dr. Dodd’s if you still want to use your traditional vet. Most vet’s won’t have a problem with this, since they typically draw the blood and send it to a lab anyway. They’ll just be sending it to her instead.

You will find excellent information on hypothyroidism in dogs as well as a link to print out the copies for Dr. Dodd’s. The copies must be given to your own Veterinarian so that they can include them with the blood work when they send it on to her.

You can check out my article regarding the latest treatment for canine incontinence.

Have you run into this kind of situation or a similar problem with incontinence in your dog?