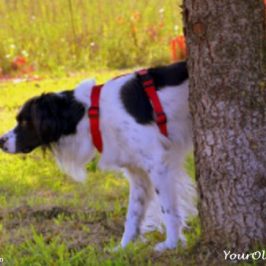 Here’s 10 of my favorite dog facts.  There are of course many more than the ones listed here; but I find these ones to be pretty funny and interesting.  Hopefully you will too!

1. Oh those male dogs! Check out this fun fact:

If a male dog wants to leave a message for other dogs that they are big and intimidating; he’ll raise his leg and aim as high as he can on a tree, mailbox or anything else for that matter.

Boys will be boys. 🙂

2. Can the shape of a dog’s face suggest how long it will live? According to this fact – yep, it sure can.  However, I’m a little skeptical…

Depending how a dog’s face is shaped determines how long he will live? Dogs that look more like wolves with a sharp, pointy face will live longer than dogs with flat faces such as bull dogs.

The shape of a dog’s face suggests how long it will live. Dogs with sharp, pointed faces that look more like wolves typically live longer. Dogs with very flat faces, such as bulldogs, often have shorter lives.

Talk about small!  A Yorkshire Terrier holds the record for the smallest dog. It was the size of matchbox at 2.5″ tall and 3.5″ long from the tip of the nose to the tail. It only weighed 4 ounces.  Wow, that’s less than a cup!

4. So, who’s smarter dog’s or cats? Dogs were the first to get humans to take care of them. Cats didn’t catch on until 7,000 years later!

5. According to this dog fact, these dogs are supposedly the best and worst dog date magnets:

The Gold retriever is supposed to be the best date magnet while the Pit Bull the worst!  Personally, I don’t believe the part about the Pit Bull!

6. Check out these two CRAZY dog laws and this link offers a lot more:

7.  Let me say that when I lose my one of my dog’s, I grieve very hard, but I can honestly say that I’ve never done this – yet anyway!

Dogs were revered by the ancient Egyptians. When their dog would die, the dog owner would shave off their eyebrows, smear mud through their hair and mourn loudly for days end.

8. So, what happened with China?  They’re not exactly dog friendly in that country today.

Dog domestication including dwarf and miniature dogs were pretty popular at one point in ancient China and dog trainers were regarded highly. Pekingese were worshiped in the Chinese temples.

9. This particular fact is one that is practiced quite often in my home.  It’s usually when I’m sleeping and my dogs don’t want me to sleep.  🙂

Dogs can hear at distances of four times farther than us. They can locate where the sound is coming from in as quick as 1/600 of a second!

10. I have to admit that if I’m on vacation – I’ll leave my dogs a message on our answering machine.