My Dog Was Petrified of Thunder 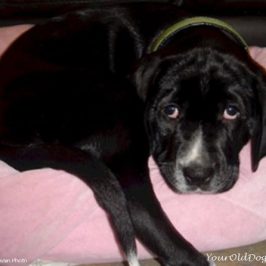 Lulu was my yellow lab that I adopted at the age of two from the Humane Society in late spring of 1996.  She was one of those dogs who was afraid of thunder, which is putting it mildly.  It wasn’t long after bringing Lulu home that her fears really started to surface.  These fears would manifest into an uncontrollable anxiety that would change our lives for the next fourteen years.

We quickly learned that we couldn’t leave her alone during a storm and this would prove to be pretty difficult when you both work.  Luckily when I worked full time, her thunder phobia wasn’t too bad at that point.

However, with each passing year, her fear escalated.  During storm season, our lives centered around Lulu and the weather. She taught me a great deal about how scary this can be for dogs like her.

As trying as it was for me and my husband at times, I would do it all again for my old girl.

We love you Lulu.

Everything about Lulu changed during these times. With every storm, her eyes became very large and she would pant excessively.  She would shake and tremble uncontrollably. It was as if she wanted to crawl into my skin.

Some dogs will simply go off on their own to a place that they have established as a safe place (eg: under a bed, behind a chair in a corner, etc). Others will bark endlessly for hours on end before and during thunder and lightning storms. For other dogs and owners, things are much worse.

Hysterical with fear and anxiety, an anxious dog will:

It is believed that barometric pressure and static electric change in the environment trigger a dog’s reaction that a storm is approaching.

Lulu had dug through our game room walls on more than one occasion and we generally would watch the weather so that we were always home with her whenever possible.  Once when we were hit with a surprise summer storm and we couldn’t make it home in time; she had completely trashed the walls in the game room. We literally had to pull splinters from between her teeth using tweezers. Her paws were bleeding. This was one one of those times when we were hit with a surprise storm and we weren’t home.

What Worked For Us and What Didn’t

We tried everything with Lulu but she was beyond the typical dog who was slightly scared, she was petrified. She would tell us when a storm was coming long before we heard the weather. She was ALWAYS right!

Here’s some of the things that we tried outside of medication. Understand that when you have a dog with such a severe state of thunder phobia, it boils down to what works (if anything) for your particular dog:

Our girl was an extreme case and the only thing that we could do to calm her was to sedate her. This wasn’t something that we liked to do and we tried very hard not to, but it was often the only thing we could. Remember, these dogs only know one thing – I Need To Get Away!  Dog owners must remain calm and patient – no matter what.

Conclusion and Other Helpful Links

I regret never trying the Thunder Shirt on Lulu.  Apparently, it works a lot like holding an autistic child when they get upset. That tight squeeze to the body is believed to calm them. Similar to the t-shirt home remedy technique, but much more sophisticated.

Please read the incredible story about Max. Max’ fear of thunder was even worse than Lulu’s.  His family endured many struggles due to his anxiety which would tragically end his life.

Please read my review here on the Thundershirt for dogs that I had one of my readers test on her own dog. Also, here’s a great report written by the DVGRR (Deleware Valley Golden Retriever Rescue, Inc.) with a lot of helpful tips for dogs who are afraid of thunder and lightening storms.

Of all the articles that I write – this is a topic that holds a special place in my heart.  It was a big part of my life for 14 years.  I hope to help others out there who are in the same situation. Please share your stories of success and otherwise, so that we can possibly make a difference for someone else.