Do Certain Dogs Seem To Like Their Own Breed Best! 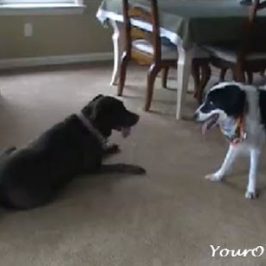 I often think so. Opinion, maybe! Over the years I’ve noticed how certain dogs seem to like their own breed best. In fact, they love their own kind.

My last doberman “Gretchen” was a very big girl with a European build. Muscular and strong like her parents from Germany.

Most other dogs were immediately intimidated by her look and almost always afraid to make contact with her.

She was everything that I admire about the doberman breed; beautiful, fearless and extremely proud.

We adopted Gretchen from the local humane society at the age of six and we were even able to talk with her former owners which gave me great insight into her personality.

Do Dobermans Favor Other Dobermans?

Gretch would play with “Lulu” our yellow lab when they were both young, but I distinctly remember her meeting up with a neighbor’s doberman and how incredibly excited she was.

The way they romped and played took me by complete surprise because I had never seen Gretchen play like that before. It was beautiful!

This fueled my suspicion that certain breeds do indeed seem to like their own kind.

Coincidence, possibly or maybe not!

Jenna is our current doberman and she’s always been pretty much a loner. She doesn’t wrestle with other dogs, tug or engage in any physical contact, period.

We rescued Jenna from the doberman rescue at the age of 2 and it was obvious that she suffered with many emotional and physical issues as well.

I often mention how Jenna is apprehensive of other dogs and the possibility of conflict of any kind.

This leads me to believe that something happened to our girl that scarred her emotionally. As of yet, I haven’t had the opportunity to see how Jenna reacts to other dobermans – but, I will at some point and I’ll let you know how it goes.

I also noticed how our yellow lab “Lulu” would play more with other labs than other breeds. This isn’t to say that she wouldn’t play with other breeds, she would; but the key is that it wasn’t the same kind of play. Each day during our walk, we would stop at our neighbor’s house so that her dog and our dogs could mingle a little.

There was always a certain excitement when Lulu hooked up with another lab. It was obvious. In fact we started saying jokingly “labs love other labs”. They would play for hours. The same goes for our current yellow lab “Maggie”.

What do you think? Do dogs seem to favor their own breed? Leave a comment below!

Check out Buster the border collie and Boo the chocolate lab having a grand old time. However, my yellow lab “Maggie” typically plays pretty hard with Boo, but she wouldn’t have any parts of Buster.